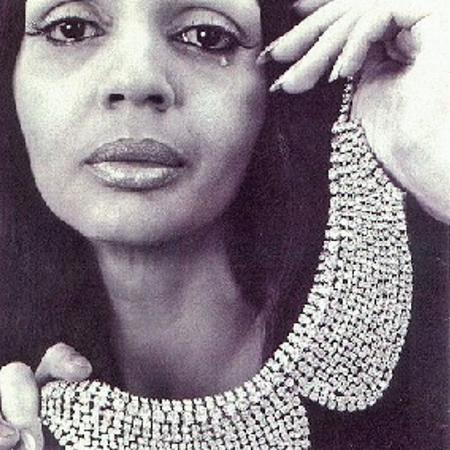 She was born Jacqueline Sonia Brooks but she proved to be a character so strong and unique and beloved that she became known as Annie Babe.  She was bold and beautiful and so very kindhearted.  She knew she was a Star but when she was selected Homecoming Queen in front of the thunderous crowd at the football stadium she  stood in her place amongst the other girls on the Court and could not move forward to accept her bouquet of roses.  She wanted to give every young woman a rose to walk with her.  Annie Babe's many shenanigans were legendary. Once, she got on the school bus dressed as Marilyn Monroe

in a long velvet evening gown and high heeled platform shoes.  The kids on the bus roared with laughter and Annie Babe laughed with them as she pretended to pose for photographers. There was no one like her.  She loved life and cherished her many friends and family.  She imagined a life full of good deeds, fun times, and of never, ever feeling old.  She loved babies, all races of people and was known for hanging out with The Elders. When Annie Babe was thirty nine years old she was driving her new Pontiac home from the showroom and the wheel came off of the car on the highway and she plunged over a cliff and lost her life. The whole town was in shock as no one could believe that Annie Babe was gone.  One night, Annie Babe came to her sister Edie in a dream and urged Edie to get up and record two songs that Annie Babe sang to her. Never having writen music before, Edie got out of bed and pulled out her little home tape recorder and sang the songs. She  later plunked them down on a piano, right hand keys only, and gave them to an arranger.  The songs became the important music soundtrack for Edie's first feature documentary film, Lost Control, concerning the problems of drug and opioids addiction.  Edie's film was nominated for the Grierson Academy Award at The American Film Festival.   Can It Really Be,

one of the two songs in the film is presented here and you are bound to say when thinking about Annie Babe, Can It Really Be You've Gone Away?Type your paragraph here.